I love Halloween. Every year I try to come up with a really fun, unique costume. Since this is my first Halloween with a baby, I knew my costume would have to be even more special and memorable. I also knew that I would be carrying my little dude, so I had to find a way to incorporate that into my costume.
After a chat with my brother-in-law I realized what the perfect costume would be. 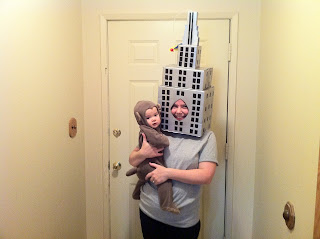 The actual monkey part of the costume was easy. I just bought a monkey costume. There are gorilla baby costumes out there, but the ones I found were just too pricey. I think I ended up spending $12 on the little monkey costume from Target. Done.

The Empire State Building part was a bit more work.

I started out with 2 shipping boxes. I made sure that the largest one fit snugly on my head, so it wouldn't move around too much. Then I added a Kleenex box and a toothpaste box. The embellishments on the top are just cut out bits of a Count Chocula cereal box. I glued everything together, cut out a hole for my face and started spray painting. After that it was just a matter of a cheap toy airplane from the dollar store, a plastic underwire from the notions department (to attach the airplane to the top of the building) and lots and lots of electrical tape. 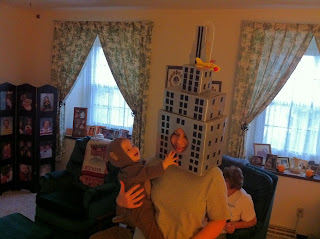 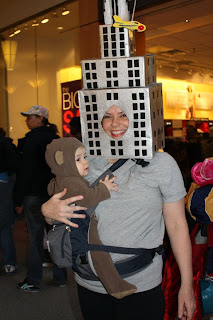 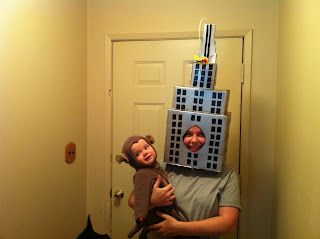 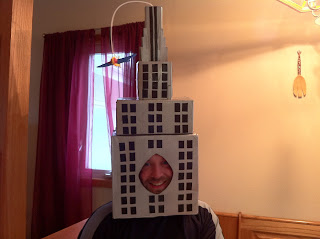 My husband even had to try on the costume.
Our King Kong costume turned out better than I had hoped and we have had a lot of fun with it.
Posted by 1337Mom at 10:22 AM