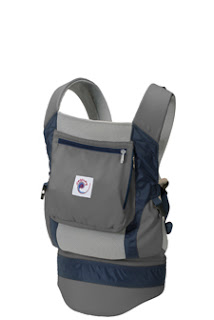 Babies are so easy to carry around before they are born. Really, you don't even need to think about it. They just hang out in your belly, kicked back and relaxing and enjoying the ride. You don't even need to hold them, so your hands are free to do other stuff, like rubbing your aching back, or re-tiling your bathroom.

Things don't get tricky until after the baby arrives. For most babies born in the U.S., their first outing involves them being strapped into a car seat for the ride home. For some reason, people decided that their car seats were too good to just use in the car. Soon the old "baby bucket" started being used all the time by parents who were transporting their child from place to place. Just think about how often you see someone lugging one of these around with a slightly bewildered baby inside.

I'll admit, for the first few weeks we carried our little guy around this way. It was so easy to just strap him in from the comfort of his room, carry him (in the bucket) to the car and then pull out the bucket and carry it with us when we had to run errands. It was even a decent place for the little guy to nap.

Here is why this only worked for a couple of weeks:

In our quest to find the safest car seat available we also ended up with the heaviest car seat on the market. Even with a 7 pound baby in it, it got pretty heavy. Not to mention that I'm fairly short, so I wasn't able to just let the car seat hang from one arm at my side. I had to hold it up and out in front of me. This got old pretty fast. Luckily, my husband came along on all of the little outings during the first few weeks. He would usually carry the car seat while I took care of things that required two hands. If we went shopping we got 2 carts; one for our purchases and one to set the car seat in. You may be asking yourself, "Why didn't they just put the car seat on top of the cart? People do that all the time." Several reasons. The first being that our super safe, high tech car seat doesn't fit on the top of a shopping cart, which is fine with me, because (reason #2) it just never seemed like a very safe option. The idea of my fragile, precious little person perched precariously up on top of a cart that could easily be bumped and topple over is terrifying to me.

Now, I would like to touch for a moment on getting stuff done around the house with a newborn.
That little person wants to be held by Mom or Dad. All the time. This makes it extremely difficult to manage small household tasks like laundry, dishes, re-sealing the driveway, etc. Rather than just ignoring all of my household tasks in favor of snuggling a baby,(believe me, it was tempting) I decided I needed to find a hands-free baby-holding solution.

After a bit of research I decided on a sling. It seemed like such a great idea. Simple, portable, inexpensive and effective. Let's just say that the sling was not the right option for us. I practiced a few times with a Teddy bear to make sure I knew what I was doing. I watched the video, I read the instructions until I was confident in my sling-wearing abilities. Then, finally, I put my 4 week old son in the contraption.
It was awful. He was kind of folded up funny and jammed in there at what appeared to be a relatively uncomfortable angle. He was not happy. I immediately decided to take him out, but he was in there so good and snug that it was a bit hard to remove him. I finally managed to extricate him from the device after a brief moment of panic and some tears, both mine and his. After that I decided that the sling was not the right option for us. I folded it and put it on a shelf and that is where it remains to this day.
(incidentally, this was before the big baby sling recall)

Time to try something new. 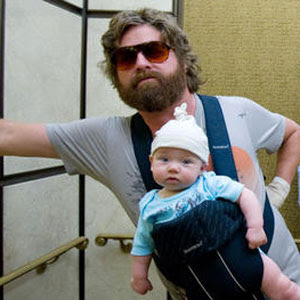 Like a lot of you, I have seen "The Hangover". There are several scenes featuring a baby in a Baby Bjorn carrier. This looked like a pretty cool idea to me. And, hey, my husband might even use this kind of carrier!

We went and bought one.

This was a great solution for me. I could put my little dude in the Bjorn comfortably and do all sorts of things. I could do laundry, dishes, vacuum...you name it. This even solved my dilemma regarding shopping. I could finally take the baby shopping with me and not have to bring along my husband or use a second cart. I just took the baby out of the car seat when we got to the store, put him in the Bjorn and off we went. I could go on walks with him in the cold weather and just zip my coat around him and the carrier to keep him warm and snuggly.
The Bjorn worked really well for us until the baby got to be about 18 pounds. Suddenly I was having back pain every time I used the carrier. Often it would get a little tough to breathe with him strapped to my chest. The carrier is only designed for babies up to 26 pounds, so we weren't going to be able to use it a lot longer anyway. It made me a bit sad to think I wouldn't be able to snuggle-carry my little guy around anymore.

Around this time I was reading a forum discussing baby carriers. Someone asked people to chime in on which carrier they liked and why. A lot of people were raving about a baby carrier called the ERGO. I didn't see one comment about the Bjorn, and since I was so happy with mine, I decided to comment. In a matter of minutes there were several replies by people telling me that the Bjorn has been shown to be bad for a baby's spine.
What? Really? How come I wasn't aware of this? I never saw any warnings or read anything about it. I did some research and apparently there are a few studies that suggest that the way a baby's weight is distributed in a Baby Bjorn can be hard on their spine. I felt terrible. Here I was risking injury to my little dude without even realizing it. I decided that it was a good thing that he was getting too big for it anyway. I also decided to look into this ERGO carrier that everyone was saying such great things about. I went to their website and checked out what they had to offer. ERGO makes several different types of baby carriers, in a lot of great colors. Customer reviews for the products are incredible. People just LOVE these things. I did some research and decided to order the ERGObaby Performance.

Now I understand what everyone was raving about! This thing is fantastic! I was so excited when it arrived in the mail. I read the manual, adjusted the straps and put it on. (By the way, the design of the straps is great. There is an elastic band attached to them to keep the excess length from flapping around. Simple, but so nice). I put my 8 month old in the ERGO and immediately thought, "This feels so much better!" The weight is distributed across your hips instead of your back. Because of this, you can more comfortably carry your kiddo for longer periods of time. Not to mention I don't ever have problems catching my breath since there is no pressure through my chest.

Unlike the Bjorn, which has a more rigid frame, the ERGObaby Performance has a soft frame. This allows my guy to move around a little more. He has more wiggle-room and as a result seems a lot more comfortable. Speaking of comfort, the ERGObaby Performance is made from lightweight, breathable fabric. No more sweaty belly and sweaty baby on those hot days. I can comfortably carry him in this carrier for hours, and he really seems to enjoy it too. The ERGObaby Performance also can be used on babies up to 45 pounds. This means that you will be able to use it nearly twice as long as a Baby Bjorn.

I never see other people using baby carriers where I live and as a result people tend to comment and ask about the baby carrier all the time. Everyone comments on how happy, comfy and cute my little dude looks in his ERGO. I wouldn't be surprised if more people started using them around here. Another plus: this thing weighs next to nothing and can be folded up into a pretty small package. As a result, it's really easy to just pack into your diaper bag. This is so much easier than folding up a big stroller and stuffing that into the trunk of your car. Speaking of strollers, we do have a very nice one that we use on occasion, but usually I carry him. I feel that babies prefer to be held so they feel like they are part of what's going on. Also, you burn more calories carrying a baby than pushing a stroller :) 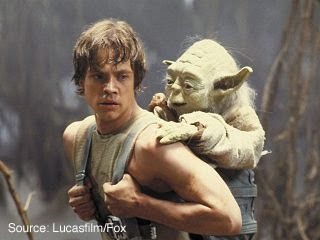 Last, but not least, I can carry him in front, on my hip or on my back, just (as my brother-in-law commented) "like Luke sporting Yoda through the swamps of Dagobah." Surely this should render the ERGObaby Performance cool enough for my husband to use as well.
Posted by 1337Mom at 10:31 AM