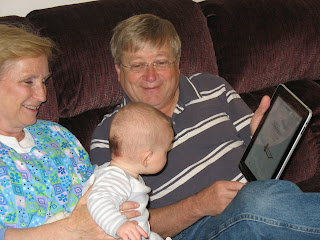 My son is a Geek.

I mean that in a good way.

It's an hereditary condition. His parents are both Geeks.  His paternal grandfather is a Geek.  It was bound to be passed on.

I met my husband, Rick, online.  Usually when I tell people that the response is, "Oh, Match dot com? EHarmony? Some other dating site?".

That's right, we met playing a MMORPG.  (If you don't know what that is you are not a Geek and will probably be lost throughout the entirety of this post.)  We were both Dungeon Masters on a world called Amon.  He had a hot avatar and I appear quite witty in game chat.

We hit it off immediately.

We eventually met IRL and the rest is history.  Eventually we moved on to a little game called World of Warcraft.  Some of you may have heard of it.  I realized that our relationship was going to last when Rick moved his computer to my apartment.  Now we could raid Molten Core side by side.  My druid kept his rogue alive through all the boss fights.  He backstabbed any trash mobs that tried to squash me.  It was so romantic!

4 years later we were married and I was pregnant.  (Despite popular belief, my son was not conceived during server maintenance.) Throughout my pregnancy I continued to play WoW.  Our guild was progressing nicely, we had regularly scheduled raids and we had a great group of friends that we played with.  We spent most evenings on Ventrilo chatting with our guildies as we raided Naxxramas, Ulduar and ToC.  It was all very social and a hell of a lot of fun.  The baby seemed particularly fond of Naxx.  He usually got very active and squirmy and kicked my bladder a lot when we did Heigan the Unclean and The Four Horsemen.  I can't imagine how annoying it was to the rest of our party when I had to take a bio after practically every pull.

My husband and I debated whether it was in bad form to take the laptop to the hospital so he could do dailies while I was in labor.  I was all for it; labor can be a very long, boring time for the dad, but in the end he decided against it. We did, of course, have the iPhones at the hospital so keeping friends and family updated on the "babby" status was easy.  As soon as Tripp entered the world phone calls were made to immediate family.  Close friends received text messages (it was 2 in the morning, we didn't want to call). We took pictures and instantly emailed them to everyone and posted them to Facebook.

A few weeks after my son was born I realized that it would probably be a while before I had time to devote to WoW, so I eventually canceled my account.  Not so for my husband.  In the first few weeks of being parents we settled into that crazy non-schedule schedule of caring for a newborn.  It seemed I was constantly either feeding the baby, changing the baby, comforting the baby or trying to get a little sleep in.  Since I was breastfeeding there was very little for my husband to do.  He played a lot of WoW.  But, he also was great at soothing the baby when he was fussy.  How did he do it?  He held the baby on his lap while he played WoW.  (I highly recommend a Boppy if you are going to try this.  It makes it a lot easier.) Tripp seemed mesmerized by the colors and movement on the computer screen.  Even at his most fussy he would calm down immediately.  He would sleep for hours like this.  When he did wake up he would look around, watch Daddy PWNing some n00b and then contentedly fall back to sleep. This was quality bonding time.

Perhaps some of you remember the hype around Easter when the new iPad was released.  For months it seemed just about the only thing my Geek friends talked about.  Being fairly Geeky myself, I was intrigued, but not convinced that we needed this new technology.  After all, I have an iPhone, I have a desktop, I have a laptop...why would I need an iPad?  What purpose would an oversized iPhone-without-a-phone serve? Everyone was in the pre-order craze.  People were following every move Steve Jobs made,  reading blogs, following techie news sources and salivating at any mention of the iPad.  I still remained skeptical.

I mentioned earlier that Tripp's paternal Grandpa is also a Geek. He was one of the people who pre-ordered an iPad.  (Believe it or not, my husband was not a pre-orderer.  He wasn't convinced we needed one either.) We were visiting Rick's parents on Easter and happened to be there when UPS delivered his Dad's new toy.  I thought it seemed pretty cool, but still just a large iPhone without the phone part. Sure, it was easier to read web pages on the larger screen, and the games looked great, but you can't put it in your pocket, and it doesn't even have a camera.  What's the point?

Everyone had a turn playing with the iPad.  Even Great Grandma was playing Solitaire on it.  Of course,  Grandpa had to show the new toy to his first grandson.  Tripp was mesmerized.  Here were all of the lights and sounds of his dad's computer, but in a more accessible package! All he had to do was reach out his chubby little fingers and touch the screen and look at what happened!  He could turn pages in digital books!  He could draw on virtual chalkboards!  He could play a virtual piano!

He had to have one.

So, a few weeks later Tripp, our 4 month old son, got his very own iPad.

Of course he isn't spoiled. This is a learning aid.

Tripp has his own games on the iPad.  He loves Smiles, Learning Pad, Chalkboard and Air Hockey, but by far his favorite is Magic Piano.  Ironic note- this video requires FLASH so you can't watch it on your iPad. Who knew that my little dude was a piano virtuoso?  He's never even had one lesson.  Clearly he's a natural.

Now, in the months that we have had the iPad Tripp has allowed me to use it as well.  I have to say, I am an iPad convert.  I love this thing!  I can't live without it! I really think that every new mom should have one.  I wish I could have had one when Tripp was a newborn.  All of those middle of the night feedings would have been much more bearable with an iPad at my side.  With a baby on one arm and an iPad in my other hand I could have easily kept myself awake and occupied by checking my email, playing a game or even watching an episode of Firefly on Netflix (yeah, yet another plus to owning an iPad:  Streaming video from Netflix looks incredible!) I know these are things you can do with a laptop, but seriously, this is much easier.  Not only is the iPad super lightweight and conveniently sized, it also has an incredible battery life. It took me a little while to get used to the touch screen, but now I love it.  I actually have accidentally tried to touch the screen on my laptop several times now.  You laugh, but you'll do it too.

When I'm home with Tripp the iPad is never far from my side.  As I mentioned earlier, I can nurse the baby while I check my email- unless he realizes I have his toy and he tries to reclaim it.  Besides keeping up with all of my cloth diaper blogs and Facebook, it's great for recipes.  When I'm making dinner of baking cookies I just have the FoodNetwork website up on the iPad and bring it into the kitchen with me.  If I accidentally get a little spaghetti sauce on the screen (not that it has ever happened, in case Rick is reading this) it just wipes right off.  Try doing that with your fancy Logitech G15 gaming keyboard.  You're never getting that Prego out from between your "Alt" and "Z" keys.

The iPad has a nice reader called iBooks.  If you need to read the latest Terry Brooks novel you don't have to run to Borders, you can just download it and read it on the iPad.  Of course, you can also read children's books with it.  Tripp likes to help turn the pages. I also like to have it handy when we are watching a movie and you have to know what other movie you have seen that actor in.  IMDB is just a couple of taps away.  I also tend to use Shazam quite a bit.  If you haven't ever used this app, you must get it.  Let's say you hear a song on the radio and you have to buy it but don't know what it is.  Shazam will "listen" to several seconds of a song and then report back who the artist is, what the song is and what album it is off of.  It's an amazing thing!  Rick and I have tried to stump Shazam on several occasions with bizarre or obscure songs and it always knows what they are.  Incredible.

My iPad even fits in the diaper bag!  So if Tripp and I are out and about and he gets fussy I can just entertain him (and impress strangers) with his Magic Piano expertise.  Or I can read him a story without having to actually carry a bunch of books with me.

I recently got the new iPhone 4 for my birthday.  Another incredible toy but Tripp can't be trusted with phones, so he doesn't get to play with this one.  The screen resolution is fantastic on this new phone.  The camera is better quality and has a flash and it takes really nice video.  All necessary when you want to post tons of photos and videos of your future concert pianist on Facebook for your friends and family who don't live in the state.  It also has a video phone feature called Face Time that I haven't tried yet since none of my "phone friends" have an iPhone 4 yet- not even Rick because he is waiting to get a white phone.  So, for now, I am slightly more geeky than he is.

Now that Tripp is a bit older and sleeping through the night I am thinking about going back to playing WoW.  After all, there is an expansion coming out soon and I miss the long discussions with Rick about talent trees and 1337 DPS.  I'm not sure if I want to give up any of my much-loved sleep in order to get back on a raiding schedule, but I do miss playing with my gamer friends. We have even joked about setting up a WoW account for Tripp.  Yeah, he's only 6 months old, but surely he could successfully level a hunter.  Go n00b!
Posted by 1337Mom at 1:53 PM